So recently, I've been getting into family history and genealogy.  It's really interesting to see where one comes from.  Well, I went ahead and paid the $69 or whatever it was for a MyHeritage.com DNA test.  It was mostly just for fun.  Where does my blood tell me that I'm from?  I fully expected it to say English and Scottish, maybe a dash of Native American and German, as this is what I've been told I am all my life.

Although, the results are similar to this, I am a bit shocked to see 0% English on my DNA's history, a little less shocking to see 0% Native American, however. 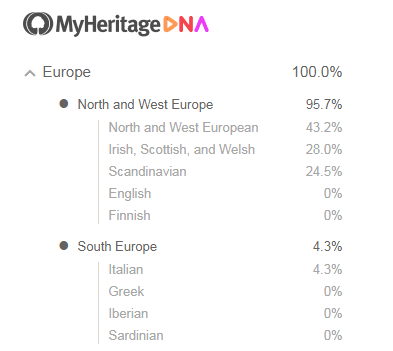 The population of Northern and Western Europe mainly includes German, French, and Dutch people. This region has been influenced by significant historical events including the formation of the Catholic Church, the Renaissance, the Protestant Reformation, and the Industrial Revolution. Imperial conquests and the age of colonization have spread Northern and Western European peoples across the globe, with significant populations across the Americas and in parts of Africa and Oceania. The area is the birthplace of Western culture, including innovations in art, literature, philosophy, and scientific methodology that have become standard around the world. In particular, Western Europeans take food very seriously. European culinary practices and dining etiquette are highly developed, with artisanal wine and cheese-making, pastry baking, and cooking having been elevated to an art.

The western region of the British Isles is populated by peoples descended from the six Celtic nations, three of which had settled in what became Ireland, Scotland, and Wales (the other three were in Brittany, Cornwall, and the Isle of Man). Each of these three nations has spoken some variant of its original Celtic dialect continuously. The Irish, the first people to settle in Ireland about 9,000 years ago, share heritage, culture, and language (Gaelic). They were organized by clan, or kin groups. The Scottish are similarly famous for the clans, but from the time of the Middle Ages have been a composite nation of Picts, Gaels, and Britons. So that the northern population speaks a version of Gaelic, while those in the south speak what came to be called Scots. Their neighbors the Welsh are called such dating back to the Germanic labeling of them as “walhaz,” meaning “foreigner” or “stranger” - the language of Wales is similarly called Welsh. The area was overrun by Anglo-Norman conquerors in the Middle Ages, and English colonization in the 16th-17th centuries changed the ethnic composition of the British Isles altogether, introducing ethnic English. Despite the unification of these countries as part of the United Kingdom in the present day, the people in each locale take great pride in their independent ethnicities, and accompanying cultures - from the family divisions as clans to the respective alcoholic beverages (Wales has a more English cuisine). The ingathering of several ethnicities in such a small space has facilitated interesting genealogical discoveries as well as mysterious connections to unravel - and for all the different heritages, nearly everyone there now speaks English.

Scandinavia is a region of Northern Europe that includes Sweden, Norway, and Denmark. Scandinavian people share a common North Germanic heritage. Germanic tribes of antiquity traveled south to continental Europe along trade, fishing, and conquest routes, eventually colliding with the Romans. Migration from Scandinavia to other parts of Europe began centuries ago, while in the late 19th century millions of Scandinavians emigrated to the Americas. Scandinavian cultural influence is readily apparent in the Midwestern United States, where many locals bear Scandinavian surnames and pass family recipes for Scandinavian foods — like lefse flatbread — from generation to generation. Ancient Norse mythology has also entered into regular English lexicon; some of the days of the week in English are named after ancient Norse gods.

The culture and genetic legacy of Italians were shaped by the Roman Empire as well as contact with northern Europe and the eastern Mediterranean. Italian exploration 500 years ago and subsequent emigration have resulted in a large Italian presence in South and North America (U.S., Brazil, Argentina and others), neighboring European countries (Germany and Switzerland), as well as in Australia and southern Africa. The European Renaissance — a period of tremendous artistic and scientific innovation during the 14th–17th centuries — began in Italy and was most famously embodied by the Italian polymath Leonardo da Vinci. For many Italians, cuisine is one of the most important elements of Italian culture. The average Italian family consumes over 30 kilograms of pasta a year.